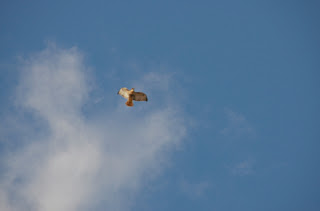 Questions and answers:
I’ve had several questions recently about this bird (some had accompanying pictures), they all went a little like:
Q: I have a black and white bird coming to my feeders, my friend says it’s a Snow Bunting but it doesn’t look quite like the one in my book.  Is it a Snow Bunting or something else?
A:  In the cases, where the bird (or picture) almost fit the image of the Snow Bunting in the field guide, it was indeed what we were looking at.  Snow Buntings only have one molt per year, the summer plumage is brownish and instead of molting into a breeding plumage, the tips of the feathers wear off leaving the males black and white by the time breeding begins.  Males will even rub on snow to speed up the wear. A hardy little bird though, when he returns to the high Arctic breeding grounds with these worn down feathers, the temperature could still be -30 degrees.
So if the bird or picture you’re looking at isn’t in the same stage of wear as the picture in your field guide, it wouldn’t look exactly the same.  Some guides show more plumages than others, even then there will always sightings of birds with plumage in between.  If you search on line you’ll usually come up with a picture that matches and chances are if it’s dated it will coincide loosely with the time of year your bird was spotted.
Snow Bunting tend to like open fields, I’ve only had them in my yard twice in 19 years, but when I lived in PEI, there were thousands in grain fields and roadside for grit.  Many took advantage of my fathers ground feed, I took them for granted but now I’d be very excited to have even a pair in my yard.
Q:  I have a small pair of binoculars, 12x25’s, I’d like to be able to get better looks at the birds I see.  Should my next step be a spotting scope or should I get a camera with a telephoto lens?
A:  It depends on your budget and what you want to achieve.  If you want to learn more about birds, how to identify them and their behavior, I’d go for the scope.  If you want to get high quality pictures, then you’ll need a high end camera.  If you just want a photo for the record and aren’t planning on blowing it up or having a calendar printed you might be happy with a point and shoot digital and a spotting scope to play around with digiscoping.
Before I made any hasty decisions that are bound to be expensive, I’d try out a good pair of 8x42 binoculars.  Whether you choose a camera or a scope your birding skill will increase greatly if you can more easily locate and observe birds doing what they do.  Then if you want to get a really close look or take a picture that’s great, but sometimes you don’t have a lot of time to observe the bird and note the various field marks, if you spend it trying to take a picture, you may have missed out.  Trying to identify birds from one or two pictures can range from frustrating to impossible, noting as much as you can while the bird is moving around in front of you is more important than the picture, if you’re trying to learn.
I have some friends who subscribe to the “shoot first and ask questions later” philosophy, but they aren’t progressing in their identification skills as fast as others who are content to sit and observe.  For every picture they show me that can identified, there are a dozen blurred shots that even they don’t know the species.  The really good bird photographers I know, were good birders first.
Some specialty stores will have demo binoculars that you’d be allowed to take out into the field and give them a really good test, take you own pair along to compare.  Don’t go on the brightest part of the day, good binoculars really shine in low light conditions.  Compare the field of view, brightness, clarity, even close focusing with your 12x25 pair, for birding I’d guarantee an 8x42 (or 8x40) will make you much happier and give you the views you’re looking for.
I have a friend with a steady hand who can take a picture with her digital camera held up to one barrel on her binoculars.  The pictures aren’t going to make the cover of Birdwatchers Digest (Mechanics Illustrated maybe) but she has an identifiable picture and a record for her yard list.
3 comments

Thinking About Spring in the Middle of Winter 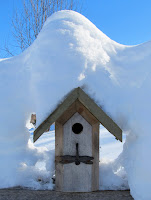 I think it’s safe to say that the farthest thing from your mind right now is mosquitoes, but as I was on the roof shoveling off some of the 4 foot accumulation of snow, I was thinking about what I could write about this week, and mosquitoes came to mind.  Actually it was nest boxes, I was also looking at a rather large amount of snow on some of my bird houses, a couple poles had bad leans and the box that was on my collapsed arbour may or may not be salvageable, I’ll find out when the snow melts.
I thought if these poles break off I’ll have to get them replaced early, before the swallows return or my summer will be even more mosquito infested than normal.  Later that night I was reading around the web and discovered that it’s National Nest Box Week, at least in Britain, they say it starts on Valentine’s Day and is the traditional time when birds pair up for the new breeding season (?).  I kind of missed the boat on this one, but here in New Brunswick, I think we still have time, later spring and all.  The idea is a great one though, a reminder to get out and clean out old nests, repair damage and possibly build a few new boxes.
I find a few boxes each spring that had been commandeered by a larger bird like a Hairy Woodpecker, they usually enlarge the hole and spend the long winter nights inside.  Swallow boxes would be too small for them to nest in, so after things warm up and the woodpeckers are thinking about nests, I’ll replace the hole.  I do this by drilling the appropriate sized hole in a small piece of board and nailing it on over the enlarged hole.  This will also act as a predator guard by making the entrance thicker, therefore harder for a cat, raccoon, or even another bird to reach in and down to steal eggs or nestlings.  If you don’t have any scrap, don’t worry, I have lot’s and keep these “holes” on hand at no charge.  If you have a persistent squirrel chewing out the holes, you can use a metal washer or drill a hole in a piece of sheet aluminum and nail it over the hole.
If you’re planning a few new additions and haven’t already placed your poles, it would be a good idea to get ready for when the snow melts as I’m sure this year there won’t be a whole lot of time between the thaw and the nesting.
In some cases it’s possible to put nest boxes in water, this is a great idea for Tree Swallows, it puts the box right in the best habitat and the water around the pole is a great barrier to some predators, like cats and squirrels.  Now is a great time to drive long poles into the pond bottoms, after testing the ice, chop a hole in a likely spot and drive the post through the ice, you may need a step ladder to get high enough to drive the pole, but imagine how much easier it is to stand on a step ladder on solid ice than it would be in a canoe this spring.
Another thing I need to do to get ready for mosquito season is add another bat house, last year I had one in a bat house and one behind an old, now tattered banner that needs to be replaced.  The little guy behind the banner was very popular last summer, he had his photo taken many times.  As the sun came around to that side of the shop he’d inch his way down to the bottom where I guess the air was a little fresher, he was about 2 feet over my head.  I’m pleased to say that most people were very intrigued and I can’t recall anyone who was scared of him.  Ten years ago it would have been a different story, I would never have pointed him out as to many people would have left screaming.  Next year Little Fuzzy will hopefully get used to a nice new bat house, I’d hate to loose either of the two I have left, I keep hoping one finds a girl friend, a breeding colony would be even better.
I also plan on building a fake chimney in hopes of attracting some roosting or nesting Chimney Swifts.  I found plans online for what is basically a 10 foot long box, open at both ends, I have just the place on the back side of my shop, and while I’m up there I’ll put a few shelves to give the Cliff and Barn Swallows a head start on making their nests.
The more bug eating birds, (and bats, and dragonflies) the merrier, if you have any you don’t want, send them my way.  If you want to attract some to your property, nest box building is a great week end project.  You don’t have to be a finish carpenter, the rougher the better for the birds, often you can even reclaim old wood, again rough sawn is preferred over more expensive dressed lumber.
Target the species you want to attract and build the nest box to the appropriate dimensions, I have step by step directions and plans for most of our cavity dwellers on line at thebirdgarden.blogspot.com.  We might as well get to work now, in a few weeks we’ll be dealing with run off and flooded basements, then we’ll be fixing everything that collapsed under the weight of the snow, before you know it we’ll be swatting mosquitoes and it’ll be too late for another year.