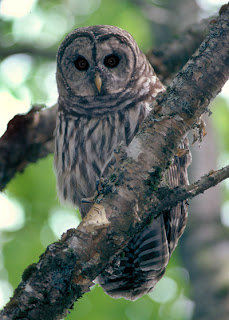 I was reading a book about owls to my son last night, he kept asking, "Do we get that owl?"  I'd look at the picture and say yes or no but when I'd read the page on each owl I found out we only got one of the owls that were written up in the book.  Many of them looked like our owls but were different species from other continents.
He said I should write a column on owls and I replied that I didn't really know enough about owls to write a whole column.  By the time we finished he had me convinced to write a column on New Brunswick's owls.
The first owl in the book was the Barn Owl, he didn't ask me if we got it or not because he was sure we did.  It took a minute to realize he was doing what many people do, he confused the Barn Owl with the Barred Owl, which is his all time favourite owl.
When he was very young, before he could walk, we had him parked on a blanket on the floor and I was keeping him entertained with my excellent renditions of owl calls. (I know 4, actually 5 if you count two that sound the same but different cadence).  I was doing the Barred's who-cooks-for-you , who-cooks-for-you-all, when I sneezed at the end.  It came out as who-cooks-for-you, who-cooks-aaaaaachooooo, he went wild and when he settled down he was asking for more, I hooted until my lips hurt and for the next few years I'd use it to get him out of a bad mood and to entertain him on long drives.
Reading the kids book he asked me what sound the Barn Owl makes and I said I can't do that one, it's a kind of screech I think.  He said no, no you know how and did the Barred Owl sneezing.  That's when I clued in to the common confusion.  After we got that straighten out, I said, "Is that why you hang around the Barn Owl cage at the zoo so much?"
He said, "Yeah, I was waiting for one to sneeze."
I vaguely remember one Barn Owl being reported in the wild since I moved here, it was over a dozen years ago and it was either found dead or died shortly after.
The Barred Owl (lots of emphasis on the "d") is fairly common, as far as owls go.  We hear them quite a bit, I got in trouble one night for waking my son up to hear one.  My wife got up to see what was going on and we were sitting in his bedroom with our heads out the window, in February.  He went right back to sleep and in the morning thought he'd had a dream.  No harm, not even a sniffle, thankfully since my wife watched very carefully, so she could say, "Told you so."
There are 12 owls on the New Brunswick bird list, 8 or 9 could be expected in any given year.  The Barn, Screech and Burrowing Owls are rare, I didn't even know we ever hosted a Burrowing Owl, too bad I lost my copy of New Brunswick Birds, An Annotated Checklist, maybe somebody'll send me the details.
I know some of you will say, "I hear Screech Owls all the time."  But, you have to remember that all owls that screech aren't Screech Owls, the same as all owls that hoot aren't "hoot owls".  The Great Horned both hoots and screeches.  The Long-eared hoots and makes a noise that could be called a screech, if that's how you'd describe a cat with it's tail caught in a fan belt.  Google it and imaging being alone at night, deep in the woods and hearing that directly overhead.  (I just played it from BirdTunes and the Guinea Pig is still flipping out.)

I went my whole life, and the last 20 odd years searching without luck, for an owl pellet, last winter my son was literally finding them everywhere.  An owl pellet is a small oblong package containing the bones and fur of the owls meal, the ones he was finding looked very much like a single piece of poop about 2.5 inches long.  The first was in the driveway on the way to the car, silly me, I look in the woods.  He said he thought it was a pellet, I glanced and agreed but said I doubted there'd be one in the middle of the driveway.  When I stepped back and looked up, it was directly under the power line coming into the house, which was also directly over the ground feeder, full of rodent attracting cracked corn.  I went back to take a closer look, he'd already teased out a skull and several bones.  Chalk another one up for the 6 year old.
Then he just started showing off, he was finding them everywhere, I don't know if it's because he's so interested in scat (fancy naturalist term for poop) or because he's so close to the ground.  We'd be walking down a trail, he'd fan out his arms and legs like a crime scene technician that found an important piece of evidence in a crowded room, and yell, "OWL PELLET".  So, now we have a bag of owl pellets in the freezer that I'd just as soon not know the origin, (the skulls are large and they're rodent) and I have a whole new appreciation for owls, as I've not seen any of these large rodents around myself.
Most of my owl knowledge and everything worth writing about comes from hanging around with my kid.  I'm sure I can say that about a lot of things.
3 comments